I have had mixed feelings about Lily & Lauren turning two.  I LOVE their little personalities developing, but I am missing those little baby days so badly.   I had some GREAT things planned for this week...none of them we have been able to get to.  Let me just give a re-cap of yesterday just for laughs:

6:00 - run, eat, read and get ready
7:30 - Brooke wakes up, eats and gets dressed
8:30 - Twins wake up, eat and get dressed
9:00 - we all load up in the car and head to wal-mart to look for a sound machine for the girls' naps.  While we were there, I didn't even look for one because I forgot.  he he.
9:20 - we all load up in the car
9:30 - we tour a school we are hoping Brooke will get into
10:00 - get home and unload
***play, scream, cry***
10:55 - Load up into the car
11:00 - Meet a friend for lunch at Chick-Fil-A....I long for adult fellowship!  :O)
12:00 - get home and lay everyone down for naps
This is where it got crazy - LOTS of screaming.  I tried to separate the girls, but they just kept screaming each other's names across the house.  Funny now - not so much yesterday.  I had plans of cleaning the house and preparing dinner.  Lauren has had a pretty bad cough (which is keeping her up)....so she had an appointment at 2:30.
2:30 - load up into the car
2:45 - we are late.  I hate being late.  Thankfully they are pretty understanding.  :O)
3:00 - Head home with a prescription for steroids and an antibiotic.  Thankfully nothing contagious, she just has some serious allergy problems. Poor baby girl.  I had an appointment scheduled for 4:15 so I called Landon and begged him to come home to watch the girls so I wouldn't have to take them.  :O)
***Play, scream, cry***
4:15 - Who knew going to the dr. could be so relaxing?!?  I'm exhausted from just the loading and unloading!
5:00 - get home and hustle to get dinner & dessert ready!  I also got a phone conversation with a sweet friend who was encouraging me in God's word. I am so thankful for the friends that God has placed in my life!
6:00 - we enjoy some great fellowship with friends after a crazy day.

Whew.  It as a crazy day and I didn't get anything done that I had planned.  Several times throughout the day this verse came to mind:

"From the end of the earth I call to you when my heart is faint. Lead me to the rock that is higher than I." Psalm 61:2

I am already missing those sweet newborn days.  I know in another year I am going to wish I could go back in time to "enjoy" another one of these crazy days.  I need to look to God for strength and patience, but I also need to ENJOY every day as a gift from Him. 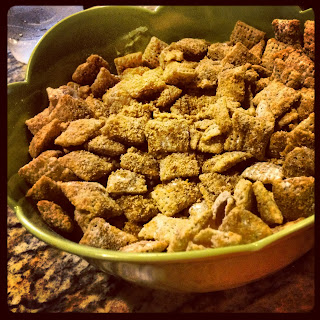 Since I didn't have time to make the dessert I planned,  I made this churro chex mix that I spotted on Pinterest instead.  It was a hit!  Have a great week!

Microwave the chips and butter in 30 second intervals until melted and smooth.  Pour over the cereal and stir until coated.  Throw the sugars and cinnamon into a large plastic bag if you have one (if not, pour on top of the coated cereal and toss) and toss the cereal in it.  Shake until coated! Throw in a bowl and enjoy.  Just a warning:  this is highly addictive!